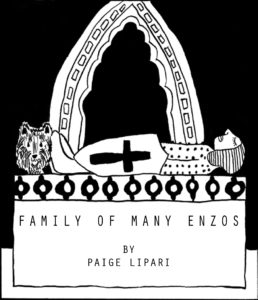 Family of Many Enzos
Paige Lipari

Here is the bloodiest hour of the Volcano,

O Love,
Covering, and never over!
Only more informed about forgetting.

Here is the bloodiest hour of the Volcano, too.

I will still bring you
the Rarest Red Rock. 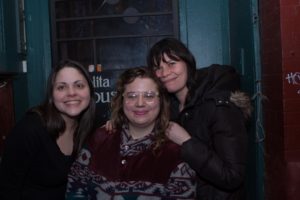 Paige Lipari is a Sicilian-American poet, music maker, cartoonist, and cook. She has worked in many of NYC’s finest bookstores, and was previously an editor at A Public Space. FAMILY OF MANY ENZOS is her first chapbook of poems and illustrations. She lives in Brooklyn.

Part magic, part folklore, part fable, part theatrical production, part manifesto, part recipe, part blood bath, Paige Lipari sketches a world that is rich with music, madness and whimsy. As it is promised in the beginning, ‘I will still bring you/the Rarest Red Rock,’ and yet through this polyphonic journey, ‘there is not telling what we will receive.’ The writing is smart, restless and captivating in its swoops from gluttony to vacuity. Yet there are moments of respite within its quick wit and metaphysical musings, ‘I just want to have people who are breathing beside me.’ Enter and you too will be part of the FAMILY OF MANY ENZOS.”

“In FAMILY OF MANY ENZOS, Paige Lipari conjures a night kitchen that pulses with memory and fantastical incident. Volcanoes provide the heat, while ‘the red moon only comes out on the nights we stuff artichokes.’ The cooking, too, is hardly homey: ‘enemies/ will be picking/ bones from their loaf,’ and be sure to look for the ‘young American cousin in/ the sweet dumpling squash.’ Smartly posed dilemmas of self-knowledge are entwined with strands of a generational saga, obliquely told yet vivid. Lipari pries at the connections that link all things sensual—food and pleasure (‘Make me a feast out of the/ the brains you’ve lost in bed’)—to render felt intimacies, as well as the starkness of isolation: ‘Where are the candles kept?/ I am alone on this ceiling,/ and wasn’t even born timely to.’ In Lipari’s night kitchen, the flame burns low but steady.”

Augury Press Release and Poems for Chapbook FAMILY OF MANY ENZOS

Paige Lipari Reads from FAMILY OF MANY ENZOS: