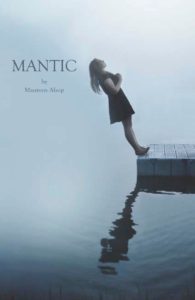 Maureen Alsop follows APPARITION WREN with MANTIC, a poetry book that underscores the art of prediction as a means for rectifying disquiet — when one is willing. You will be made to look toward spine-white shores, salt lakes at the empire’s boundary. You will hear voices dwelling within the other voice. You will inhabit the shades turning in the grass at the doorway, sun-baked origins, amaurosis before language. You will dream of the past as a form of begging, the future as your face pressed between the landscape’s burnished pages. You will not lie still.” 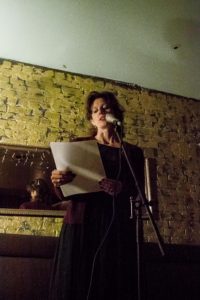 Maureen Alsop creates a world where language and rhythm form a perfect ‘fusion.’ This poetry that is both inventive and elegant and yet never loses emotional depth…. As a reader I felt I was being taken on an extraordinary journey in which I was offered new and unexpected ways to experience the world. Throughout all the poems there is the underlying beauty of expression; a sense of real joy that is felt by a poet pushing the limits, bypassing boundaries, creating whole new territories of the mind, heart, and voice.”

We can tell when a poem is sent out into the world scared and these poems are the opposite. They’re fearless. Alsop is like a hero who boldly moves forward and never looks back. She’s a social revolutionary using words to change our concepts of reality and the world.”

I followed Alsop down Mantic’s rabbit role as willingly as the prepubescent girl depicted on the book’s cover seems to be entering into a pact with the water below. I was hypnotized by its Ouija-board-like logic, as if the poems were being spelled out for me before my eyes: an inscription of pigeons, the graffiti of circles, the sun’s library, speech as theory’s mirror, the dark’s lexicon of mosquitoes, the fuck bodies infinite pages.

Alsop is an alchemist, possessing the uncanny gift of rendering the concrete abstract, the opaque transparent: Among the glass trees, specific are the smoke rings, their pale shadows flood an imagined garden. As if in explication of her aesthetic, ‘Sideromancy’ continues: I have attempted to dissolve in singular fire-strikes the familiar arrival of moths.

Alsop has succeeded handsomely in dissolving the familiar: those liminal borders between poem and poet, poet and narrator, narrator and narrative, seer and seen. We are the fortunate voyeurs and trustees of her journey.”

These poems are filled with genuine feeling and intelligence. [Alsop] writes with an emotional tension that rarely lapses or becomes distraught.”

Review of MANTIC on Prick of the Spindle

Review of MANTIC  on Cleaver Magazine

Review of MANTIC on Washington Independent Review of Books

Review of MANTIC on The Offending Adam

Review of MANTIC on Arsenic Lobster

Review of APPARITION WREN on Coldfront

Review of APPARITION WREN on Pank

Interview with Maureen Alsop on Pank

“Lecanomancy” by Maureen Alsop on Meanjin

Poems by Maureen Alsop on ditch

Poems by Maureen Alsop on The Citron Review

Art and Poems by Maureen Alsop on Supersitition Review

Poems by Maureen Alsop on The Kenyon Review

Video Series, via Your Impossible Voice: