**Below is an excerpt from prose finalist Ellen Winter, which, due to a glitch in technology and spam folders on our end, we’re getting to you a few weeks late. We hope you’ll take a second to read and enjoy Ellen’s prose as you did our other finalists.** 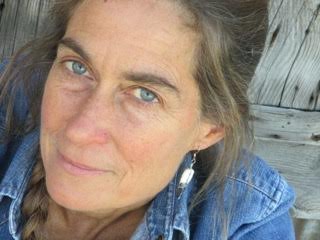 “The Little Mission” from Wee Hours and Other Stories

Swede was slowing for the cattle guard that marked the ﬁnal fence line when something shifted in the clearing below him, catching his eye. He braked hard, cranking down a window sluggish with mud. At ﬁrst glance it all looked normal enough. The pasture was a small one, backed by woodlands and divided by Little Mission Creek. There were a couple of outbuildings he’d never found a use for, an old loading pen that held cattle in its day. The creek ran right through the middle, all but a glint of it hidden by the trees.

In the shadow of one of those willows, a large animal was trying to be still. It was a horse, a well-groomed bay, head lowered to the ground as if grazing. The gelding was saddled—that was the ﬁrst thing that struck Swede as odd. And it wasn’t grass he was nibbling at, but the collar of a woman’s shirt. The woman lay on her side, hands tucked beneath a cheek. She looked peaceful, so much so that Swede nearly opted to drive on by. But most folks wouldn’t nap so close to a roadway. He would have to investigate. Pulling onto the grassy shoulder, he parked.

The truck’s heavy door opened with a screech and the horse spooked. Swede approached the woman with stealth, worried he might catch her in an act of a private nature. When he was close enough he crouched, hands on knees, peering cautiously into her face. It was Elsie Tarnower; Swede should have known that by the oversized clothing. Elsie was fond of menswear. Long-legged Wranglers were cinched at the waist by a wide leather belt. Her shirt was a well-worn ﬂannel. Pointed ﬂaps held the pockets closed with pearly snaps. If there were breasts under there, Elsie did her best to conceal them.

It was the look on her face that undid him. Only babies should be capable of such repose. That peacefulness was odd to see on the likes of Elsie Tarnower. She was a big gal and a busy one, proud of the fact that she could outwork most of the neighborhood men. She’d been called antsy by some and hyperactive by others. One rancher had gone so far as to say she was spastic—annoyed, no doubt, that she’d been hired by someone else.

Swede tried whistling. Then he tried shufﬂing his feet. Spurts of dust settled on her head and shoulders, but Elsie Tarnower was unperturbed. He called her name, softly at ﬁrst and then louder. Bending close, he whispered a string of obscenities in her ear. If she was faking, he’d know it by now.

Ellen Winter’s short stories have appeared in a number of magazines including Fiction, New Letters, The Antioch Review, and Brain, Child. Her first collection, The Price You Pay: Stories, was a finalist for the Flannery O’Connor Award, and went on to be published by Southern Methodist University Press. A second collection is being circulated, and there are a couple of novels in the works. Awards include fellowships from the Arizona Commission on the Arts and Bread Loaf. She lives with her husband and three children in Livingston, MT, where she makes a living as a housekeeper.