Sarah Lawrence College recently announced an exciting collaboration with Mayapple Center for the Arts and Humanities, an arts retreat outside of New York City whose focus on sustainability and mindfulness they hope to bring to a weeklong intensive on creative social transformation. The first workshop, which will take place from June 12-June 19, 2016, is titled ““How Can Artists and Scholars Respond to Climate Change?” and will offer concentrations in Visual Arts, Poetry, or Music, with opportunities to work across disciplines. The program will culminate with an exhibit, reading, and performance showcasing students’ work.

For more information on the program, tuition, and how to apply, head over to Sarah Lawrence’s Center for Continuing Education & Professional Studies.

Big Other‘s recent blog post entitled “Most Anticipated Small Press Books of 2016” features three Augury names among a body of work recently published by independent presses. Arisa White‘s you’re the most beautiful thing that happened, Sara Schaff‘s Say Something Nice About Me, and Augury Editor Kate Angus’ So Late to the Party were all mentioned on the list.

Head over to Big Other to read about these and many other titles to look for this year. 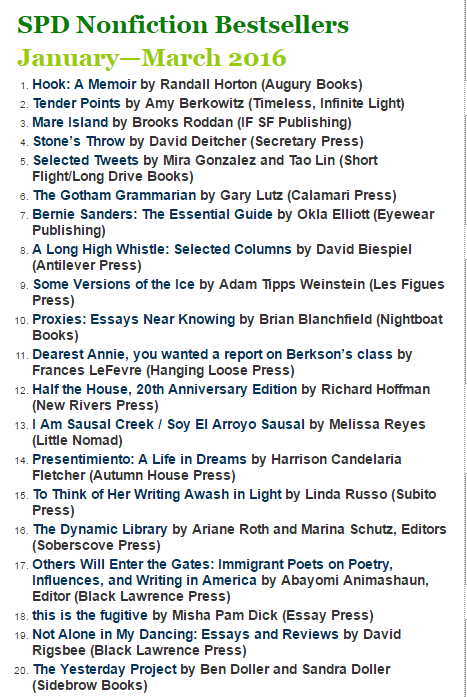 Hook can be purchased through Small Press Distribution via Amazon.

Xavier Review, of Xavier University in New Orleans, is currently accepting submissions for forthcoming issues. All submissions are welcomed, but the magazine has historically devoted itself to discovering writers interested in the American South, New Orleans, the Gulf and Caribbean sphere, African American culture, ethnography, and religion. Recent issues include work from Rodney Jones, Salgado Maranhão, Laurie Filipelli, A. Loudermilk, Julia Story, Gregory Lawless, and others. All submissions, comments, and questions should be sent to Ralph Adamo at radamo@xula.edu.

On Monday, April 11, 2016, join Augury Books for a launch of Alicia Jo Rabins‘ Divinity School at Unnameable Books in Prospect Heights. The event will begin at 7pm, featuring readings by Rabins as well as Augury authors Joe Pan, Frances Justine Post, and Augury’s founding editor, Kate Angus. All are invited for a night in celebration of literature and good company. See the Facebook event for more information.