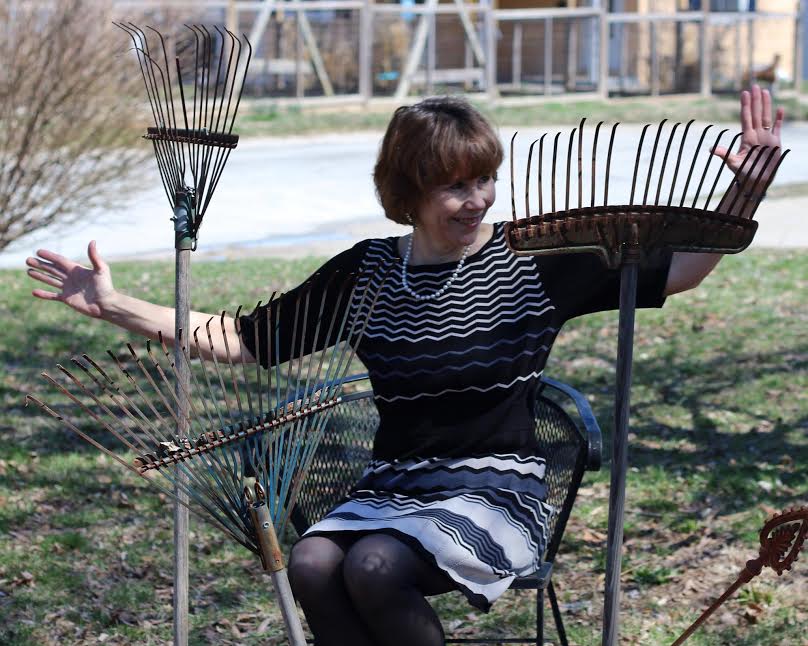 “Roy” from Too Smart For Her Own Good

“Let’s do the wine,” said Roy. He’d forgotten a corkscrew, but Francis’ things were in the back, and Roy used the carpenter’s rule to force the cork down into the bottle. At first it kept bobbing back up, blocking the opening, but finally he managed to wedge it sideways, below the neck. He swigged from the bottle and held it out to me, but I waved it away; I was scrounging around for the plastic go-cups that were always lying around, among the marker stakes and graveyard inventory forms. I found two, and Roy poured, nearly draining the bottle. I thought of Rushing Rapids as I watched the wine chugging over the cork.
“To Francis, for providing the wheels and the brandy,” said Roy, raising his cup to toast.

Roy frowned but he drank; his Adam’s apple rose and fell. Noticing it—noticing him—I felt much too large and awkward for the car, suddenly: the cow Mom was always saying I was. So I got out and walked around to the cemetery behind the church. The place was ancient, part of it was, anyway—old enough to please Roy, who like Francis, his idealistic, historic preservationist father, was in love with the past. At the farthest end, some of the marble tablet stones had sunk so deep that you wouldn’t have known what they were, if not for the church and the other, newer graves. Others lay toppled beside their bases. In the middle of the yard stood a cluster of lichen-covered obelisks.

Close to the church were the newer stones: granite blocks with polished faces and roughened tops, like Dad’s. There were vogues in tombstones, like everything else. There were even vogues in whether it was best to live or die. When Mom’s brother, my uncle, got sick they’d told him six months, given him painkillers and sent him home to wait for his end. That was the first time Mom nursed anyone; she was only fifteen. But with Dad it was, We’ll try everything, to give him as long as possible. Though his prognosis was better, too: kidney failure was more treatable than metastasized cancer. So there was the transplant, and afterward, when his body rejected it, two years of dialysis, during which they somehow made me. Mom was six weeks pregnant when Dad had his stroke. Even then they kept him alive for two more months on a respirator. The second stroke was a blessing, said Mom. They should never have tried to save him. And now they probably wouldn’t have, she believed—wouldn’t have recommended the respirator, at any rate. Now ideas were swinging back the other way. In a few more years, Mom predicted, they’d be packing people home again, telling them, “Don’t worry. Dying is perfectly

She was right about that, but she’d been wrong to remarry before Dad’s body was even cold. Wrong as well, to do what she did to Roy. And wrong to say all the terrible things she said to me.

Evelyn Somers is the associate editor of the Missouri Review and a past contributing editor for Bloom. Her fiction has appeared in Crazyhorse, Georgia Review, Shenandoah, the Florida Review, South Dakota Review, Pank, the Collagist, and others. She is the recipient of a Barbara Deming Foundation grant for fiction. Books she has edited as a freelancer have won the John Simmons award, the Drue Heinz, and the Peter Taylor prize for the novel and have been published by both university and small presses and larger, commercial presses. She is at work on a novel and a variety of shorter projects. Her website is evwords.com.