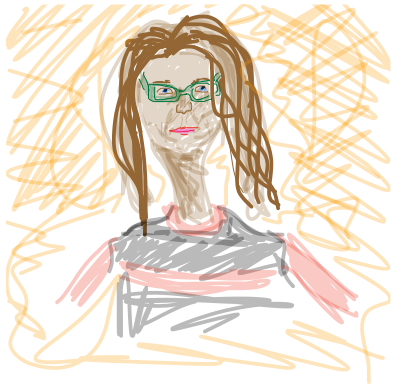 “Ghost Deer” from True Love and Other Dreams of Miraculous Escape

“This happened before my Dad took off, like a long time ago.” Colin’s blinking a lot, because he just got contacts, and it makes his eyes look big and wet, plus with his reddish brown hair and brown freckles, and the fact that he’s skittish and slim, he looks a lot like a deer himself.

Fiona turns from the sink and says over the rushing water, “What did you say about a deer?”

“Is this your Seder story?” Little My asks.

“It’s just this deer, okay? One day Dad was like, Get your nose out of that video game, Son, we’re going hiking.”

“Whatever. You know I hate hiking. So then we were walking in the gorge, like a long way up, up by Taughannock Falls, and no one else was there because it was like October and grey and cold and no one wanted to be there, obviously. Then we saw this deer. It was tiptoeing along the cliff edge above the falls. When we saw it we were all, Whoa, holy crap! The deer heard us and freaked. It tried to turn around on the ledge or whatever. And it fell off the cliff. Like a long way.” Colin’s face is so pale now his freckles seem to pulse. His eyes blink.

“Are you serious?” Fiona says, turning off the faucet.  Daniel’s shirt floats winey, salty and abandoned in the sink. Fiona’s standing by the table holding the kosher salt. “I thought deer were sure-footed, like cats.”

“It was lying half in that pool at the bottom of the gorge and half on the like, gravel,” Colin says. “Its back was broken or something. It couldn’t move even when we got up close to it, except it’s eyes were rolling around. We realized if we left it there, the coyotes or dogs would get it.”

“Did you call the cops?” Little My asks.

“We put it out of its misery,” Colin says, “or whatever you call it.”

“Coño,” Daniel says. “When did you say this happen?”

“Nobody ever told me this,” Fiona says. “What do you mean you put it out of its misery?”

“Dad was like, ‘Son, you have to put this deer out of its misery.’ And he handed me a big rock.”

The Los Angeles Times called Micah Perks’ first novel, We Are Gathered Here (1997, St. Martin’s),  “a tightly woven story that is as fanciful as it is grimly real.” Her memoir, Pagan Time, came out in paper in 2009 from Counterpoint, has been translated into Korean and is an audio book from audible.com. In 2010 The San Francisco Chronicle listed it in Best Summer Reading and Adirondack Life listed it as Adirondack Required Reading.  She’s published short stories in Zyzzyva, The Massachusetts Review, and Epoch, amongst many others, and her stories have been anthologized in The Encyclopedia Project, Viz Inter Arts, The Best Underground Fiction and others. Four of her stories have been nominated for Pushcart Prizes. She has been given multiple residencies at The Blue Mountain Center and received a Saltonstall Foundation For The Arts grant. She won an NEA in 2008 for the first chapter of her novel-in-progress. Recent essays have been published and are forthcoming from The Rumpus andTin House. Micah lives with her family in Santa Cruz California, where she co-directs the creative writing program and is a professor in the Literature Department at University of California, Santa Cruz. She’s at work on a novel.