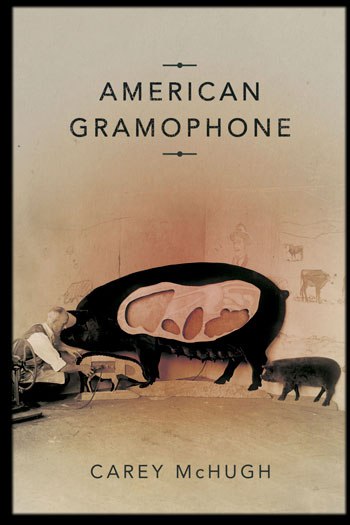 In Cleaver Magazine‘s winter issue, among poetry and prose, flash fiction and art, is a book review by Clare Paniccia of Carey McHugh’s American Gramophone. Paniccia opens with a suggestion:

In approaching Carey McHugh’s American Gramophone, one might first consider this question: What is the song of America, or American culture? It’s easy to jump to the obvious conclusions—the United States has strongly defined itself through its velocity, whether in industry, technology, or commercial growth, and its music has become largely representative of these themes, with contemporary pop artists representing the almost-electric shine of the digital age, rock bands highlighting the working-class, and country groups crooning over the “loss” of an easy-going, slow-paced lifestyle.

She’s hesitant to suggest that we impose on these poems our notions of what it means to be “American”—notions which, although true of a certain brand of Americana, do not do justice to the now-muddied origins of this concept or of this land. Nor is this true of McHugh’s fervent vision: hers is an America stripped of its associations and left with its most unruly, primitive form. Paniccia continues:

…what if America’s song isn’t something you can quickly flip to on a radio? What if America’s song is something that deviates completely from the mainstream—something pared to its most visceral form: an instrumental, organic, and natural tone? Think of the vibrating note of a fiddle, the deep strum of a guitar, and bare, haunting vocals. The sounds of folk and Americana that seem to eek out of valleys, creeks, and forgotten forests—quietly shivering their way into the undercurrent of the American everyday. These are the notes that wind from McHugh’s own gramophone, characterizing this dark collection with a taste of folklore and caution that asks the reader to step out of his or her American associations and return to the frontier’s beginning—the land at its most original, and its most severe.

Paniccia is right to characterize McHugh’s world as one of transience and volatility: for to speak of nature and its song is never to speak in constants, but rather in ruddy uncertainty. Divided in several sections, American Gramophone may be seen perhaps as a meditation on a forgotten history—one free from the notions of industry and development—with Section Two specifically serving as an epitaph to a society now living among ruins.

Poems like “Aviaries and Asylums” and “The Plenty” document this history, detailing how the individual has turned from the organic in an attempt to construct tools and resources to overcome earthly constraints; yet, McHugh’s song always carries in the background, accompanying inevitable failures—“I will try four strings tuned in fifths to the sound of falling.”

To read the review in its entirety and for more of Cleaver, head over to their website for their winter issue.