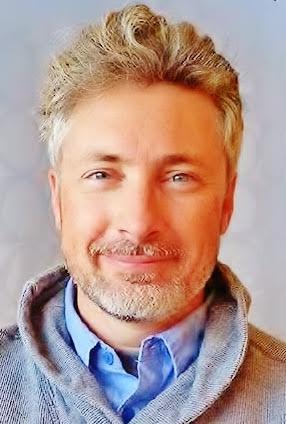 “Selvin the Christmas Elf” from Girl with a Goat’s Voice

Winter bedtime legend, our family favorite, of Selvin the Christmas Elf—how Grams tells the tale: Dear sweet Selvin driving his pretend-dead girlfriend south to Arizona and going in no direction but beams bouncing ragged over cracked two-lane highways, to that place where cliffs go to die, where cliffs drag themselves like the worms of Dune across rock seas and deaf clay thirsting—or so Selvin imagines—for newness, for lush grass, for supreme flatness, oh, but finding only heaps of dry ancestry, and on that first night how Selvin the Christmas Elf sleeps with her body in the truck bed, his huskies curled over their shins while an autumn storm converges from Baja to ping the camper shell, winds abiding ever stronger, winds pugilizing, weaving, heave-whistling each window slit and colding every bolt to where, at one point, a terrific gust agitates the axles and Selvin the Christmas Elf thinks the pretend-dead girlfriend has moved—unnerving, sure, but in morning’s drab reality, nope, so Selvin makes a campfire from sodden cardboard as ravens circle like cursed Girl Scouts and he burns everything he can find, burns it into a different earth of vibrating floors of smoke that resuscitate pretend-dead girlfriend, who, with a loose cough, slinks over the tailgate to take up a plastic spoon, to feed them pre-stirred yogurt, its icy nips, and soon their site’s warmed and soon she urges they stripped off those road-spiced North Pole uniforms to fuck gratefully on a rain-beaded truck hood (even though, way before release, Selvin the Christmas Elf, still stuck in that Arctic pall, in that long-gone crevasse of a toy builder’s mind, scowls at the huskies for scampering around their love-making, for chasing chipmunks, for rearing back and boxing, the fruitlessness of their mock battles, which make Selvin think, All life as just play? Is that why I left?), though suddenly now the haze is clearing and beyond the girlfriend’s myth-sharpened ears an unbundling sun reminds Selvin the Christmas Elf to concentrate on this present, on rasping, twining, not violently, but steadily, his tool attuned as horologist finger, as so patiently trained, yes, for he’s the worker who works for wonder alone—or no, better, the man with the plan, the one who escaped, who wouldn’t rectify revolution and individuation, who saw through the hoary-white lies but couldn’t do it alone, had to let her drag him into it, as if it were his idea, as if it were ever his, just like this: he’s done, yanked loose, condom cast on the last smoldering log, all noxious smoke but no chimney, no plate of cookies, nothing to keep it ordered.

Nate Liederbach is the author of the story collections Doing a Bit of Bleeding, Negative Spaces, Beasts You’ll Never See (winner of the 2014 Noemi Book Award for Fiction), and the forthcoming Blessings Galore and Tongues of Men and of Angels: Nonfictions Ataxia. He lives in Eugene, OR and Olympia, WA.