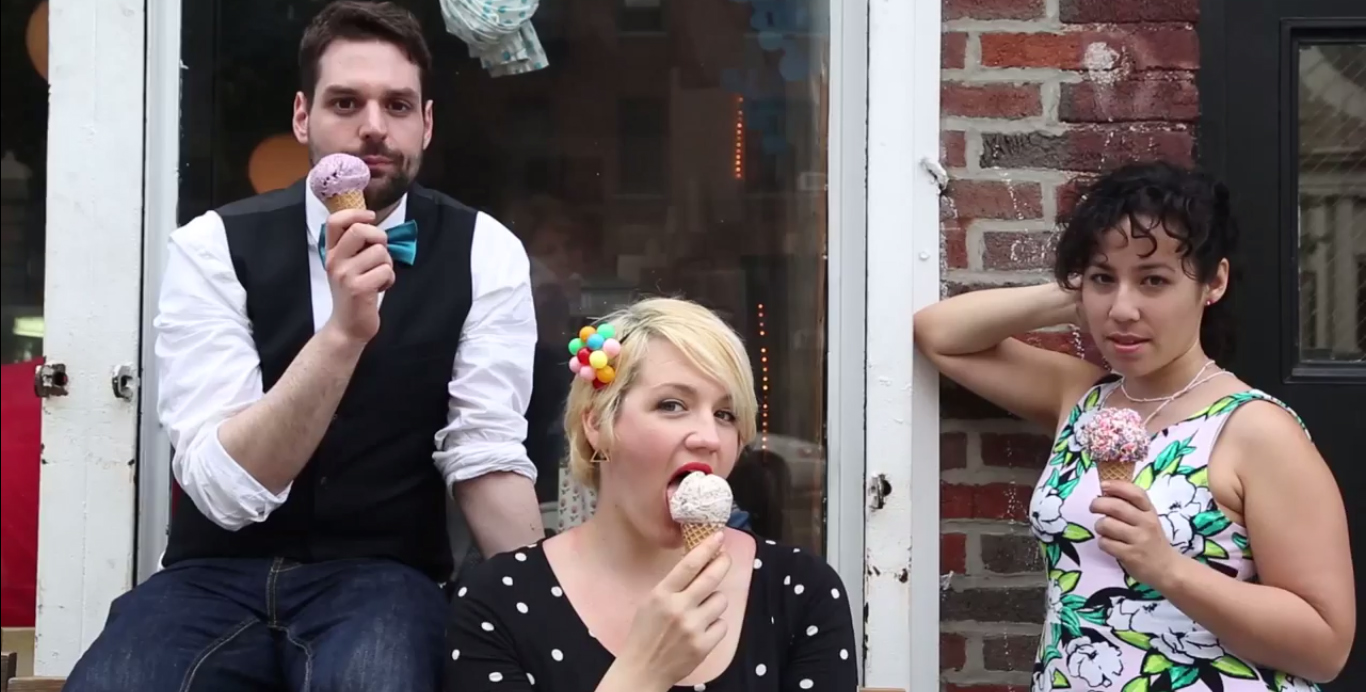 Augury Books: Tell us a little bit about your upcoming project, The Perpetual Emotion Machine EP. What can your fans and followers expect?

Kate Branagh of Stevie and the Lion: The Perpetual Emotion Machine EP is Stevie and the Lion’s recording debut. These are true and personal stories sung by big expressive voices. The songs selected for this album balance artful sincerity and intimate, straight-up, unashamed pop. A vocal duo accompanied by guitar, accordion, and clarinet, Stevie and the Lion delivers a stand-out sound with an untraditional framework to support strong pop sensibility and poignant lyrics. These songs are as thought-provoking and emotionally stirring as they are fun and easy to listen to.

A: How did you start songwriting? How has your process changed or evolved since you started?

K: I have been songwriting and performing as a solo artist since I was 15 years old. I went through a Joni phase. And then an Ani phase. And then with my solo album “Minutia” I finally accepted that I was INDEED a writer of pop music. Dan Testa, with a musical theater background, started experimenting with songwriting in college, collaborating and performing with a band and lending his amazing sense of harmony as a backup singer to many of us in the NYC music scene. In 2009 we became roommates and started to collaborate naturally around the house, at first just with Dan adding harmony over whatever I was working on. But soon he started bringing his own lyrics and melodic ideas to the table. Over the past few years of writing with Dan, I have seen him develop into a thoughtful and mature songwriter. On my end, learning to collaborate with Dan has made me a much more focused and prolific songwriter. We regularly schedule songwriting sessions and are continually talking about editing whatever ideas we’ve been chewing over. It’s an amazing connection to have with a person! We make each other better artists.

A: What is the history of Stevie and the Lion? What about the meaning behind the name?

K: Stevie and the Lion was formed by Dan and myself in 2010—the year before I developed vocal nodes that ended up altering my sound and limiting my range. As I started to teach myself to sing again, Dan and I started collaborating. Eventually our casual writing sessions turned into something more serious. We developed our writing style and sound over the next year, and then in 2011, Carolyn joined the band after seeing us perform live.

The name Stevie and the Lion took us a year to come up with. We like to leave the source a mystery but what I CAN tell you is that it involves Ebay and a T-shirt made by some hippy witch from the Midwest. That’s all you get!

A: What encouraged you to do an Indiegogo campaign?

K: The music industry is an ever-changing beast. Albums used to be funded and produced by record labels. Today musicians and artists need to be directly connected with the audience. Through crowd-funding sites like Indiegogo, fans get to impact the industry by ensuring the music that they love gets made! We subscribe to this notion as fans of music, and so it was an easy decision when it came to raising money for our own EP.

A: Your recent parody, “5 Taylor Swift Songs that Are Actually About Sandwiches,” has really blown up. What inspired this song? Do you frequently incorporate comedy in your music, or was this a departure for the band?

K: Ya know … we are just a funny bunch of kids! When we’re together we’re constantly making up fake songs about random nonsense and/or inappropriate subject matter. Dan’s endless well of creativity and comedic timing is a near miracle. Despite the serious subject matter of our songs, our Internet presence and onstage banter tends to be sweetly inappropriate and always hilarious. The idea for the song came from our friend Armand Valdes at Mashable. Dan and I lived with Armand for a time and so he knew that we were the perfect group to tackle this challenge. Dan Testa also happens to know every Taylor Swift song in existence, so we had that business pounded out in about 20 minutes! We had a blast doing it and look forward to working on other parodies!

Purchase the full digital download of Stevie and the Lion’s “The Perpetual Emotion EP” and help support their campaign for six more days! Go on—it’s the holidays!