Augury’s Michigan-born editor Kate Angus has recently been featured in the 2014 edition of New Poetry from the Midwest, published by New American Press. New American Press is an independent literary publisher focusing on contemporary fiction, nonfiction, poetry, and translations from across the United States and around the world. Also featured in this anthology are Nin Andrews, David Baker, Karen Craigo, Lee Upton and Joe Weintraub.

Check out the anthology on Amazon!

Augury Books’ founding editor, Kate Angus, will be featured in Outpost19‘s A Book of Uncommon Prayer, an anthology of “everyday invocations,” due out in May 2015. Angus appears alongside Alicia Jo Rabins, a recent winner of the APR/Honickman First Book Prize and reader for our offsite AWP event in 2014, as well as a myriad of other known talents, including Marie Howe, Bob Hicok, Leslie Jamison, Catherine Lacey, and Rick Moody. The anthology is edited by Matthew Vollmer, and all proceeds from book sales will go to 826 Valencia, a San Francisco-based non-profit organization that is dedicated to supporting creative and expository writing skills in students ages six to eighteen.

“Time in The Family Cannon,” by Shena McAuliffe, from Quarterly West issue 82

Quarterly West is a literary journal put together by the PhD writing program at the University of Utah. The most recent issue houses a review of Halina Duraj’s The Family Cannon (Augury, 2014) by Shena McAuliffe, who has detailed time and possession of memory in Duraj’s book graphically (chronology pictured above). McAuliffe relishes the emotional weight that Duraj’s stories hold:

“At the end of each story, I had to take a break before moving on to the next—a break from the disappointed desires, the steadfast self-sacrificing mother, the madness and the ghosts, the struggle to remember, to say things just as they should be said. In the end, what is most striking about Duraj’s book is how it moved me; it exhausted me in the way that a good story should.”

Alongside McAuliffe’s review in the summer issue is a creative nonfiction piece by Augury editor Kate Angus. Read both and learn more about the journal at the Quarterly West website. 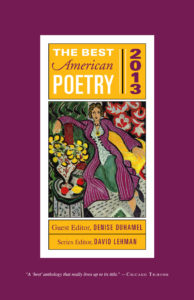 Augury editor Kate Angus is guest-blogging for the Best American Poetry blog this week. Check out today’s post on translation. A new post will go up daily throughout the week on an array of topics, including the importance of secrets, mentoring, using the second person, as well as a surprise.